To share your memory on the wall of Charles Eppert, III, sign in using one of the following options:

Provide comfort for the family by sending flowers or planting a tree in memory of Charles Eppert, III

Print
Charles Hayes Eppert, III, age 80 of Fairfax, Virginia was called home to be with his Lord on Wednesday, December 24, 2019.

Chuck was born on August 19, 1939 in Charleston, WV, the oldest son of the Charles Hayes Eppert, II and Margaret Fulknier Eppert. Chuck grew up in Dunbar, West Virginia with one brother who predeceased him, Stanley Eppert. After graduating from Dunbar High School, Chuck enrolled in West Virginia University as an Engineering major. Chuck met Bonnie at First Baptist Church Morgantown on High Street where they fell in love and were married April 21, 1962. After marrying, the two moved to Chuck’s hometown of Dunbar, WV. Chuck got his first engineering job working for Milam Engineering and then later working for C&P Phone Company. It was in Dunbar that Chuck and Bonnie had two daughters Debbie and Susan. In 1974, the family moved to Northern Virginia where Chuck was employed by C&P Phone Company which later became Bell Atlantic, then Verizon. He retired from Verizon in June 2002 and before his retirement he helped to engineer numerous different inventions for the Telecom industry. Chuck was a brilliant engineer and to his credit he had 13 patents in his name, he testified before the U.S. Congress, and he worked closely with the White House and the FBI. Chuck and his family became active members of Ox Hill Baptist Church in Chantilly, Virginia. Chuck became the music director for 12 years where he enjoyed his love and passion for music and worshiping God, and he was the Men’s Chorus director for 30 years. Chuck directed many musicals for the adult choir and he and Bonnie also worked with the youth group. In recent years Chuck and Bonnie were involved in a group of church friends called the Silver Threads. He enjoyed playing and watching Golf, cheering on the WVU Mountaineers and spending time with his family. Chuck was a loving, caring and devoted husband and father and was always ready to help anyone in need. Chuck has always been deeply loved and will always be deeply missed and loved forever, by his family and friends.
Survivors include his daughter Debra E. Davis-Lamb and her husband James Lamb, daughter Susan C. Eppert and her partner Christian Knoster; four grandchildren, Andy Davis and his wife Shana Davis, Phillip Lamb, Megan Ossenfort, Will Ossenfort and a great-grandchild Isaiah Lamb.

If you would like to donate in lieu of flowers, the family requests that you please consider donating to the Alzheimer’s Association at www.alz.org.

To send flowers to the family or plant a tree in memory of Charles Hayes Eppert, III, please visit our Heartfelt Sympathies Store.

Posted Jan 03, 2020 at 01:01pm
Please accept our most heartfelt sympathies for your loss... Our thoughts are with you and your family during this difficult time.

Posted Jan 02, 2020 at 10:26am
Please accept our condolences and may our prayers help comfort you and your family. From: Your Booz Allen co-workers

Posted Dec 27, 2019 at 08:02pm
Debbie and Susan,
Will always remember your dad for his love of music. He loved working with the youth at Ox Hill and being part of the adult figure for the New Direction Singers. Both your parents were always there with support for Eddy and I when needed someone to talk to.
Will miss them deeply. Love you both and you and Susan will always be in my prayers. Charlotte Arnold (Mrs. "A")
Comment Share
Share via: 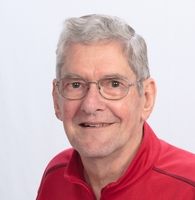