Use the form above to find your loved one. You can search using the name of your loved one, or any family name for current or past services entrusted to our firm.

Click here to view all obituaries
Search Obituaries
Immediate Need
We are here to help you. If you have need of our services, please call us, day or night, at:
703-368-3116
To better prepare yourself, we have provided you with some helpful information regarding the immediate need process.
Contact Us / Location

Ordering flowers from our site ensures that your order will reach us or the family in a timely manner, and your gesture of support will remain acknowledged in the Book of Memories for future generations. We only work with local florists so we can maintain the sense of urgency and quality of your selections. We thank you for helping to support the family during their time of need, and will fondly remember your kind gesture.

To share your memory on the wall of Charles Thompson, sign in using one of the following options:

Print
On October 10, 2019, Charles Thurston Thompson passed away at the age of 62 from complications from diabetes and kidney disease at Annandale Healthcare Center in Annandale, VA.

Charles was born on January 2, 1957 in Alexandria, Virginia... Read More
On October 10, 2019, Charles Thurston Thompson passed away at the age of 62 from complications from diabetes and kidney disease at Annandale Healthcare Center in Annandale, VA.

Charles was an alumnus of T.C. Williams High School, residing most of his life in Northern, VA. He worked for many years at the Goodwin House in Falls Church as a maintenance engineer until he became ill. He moved his family to Mousie, KY for several years before returning home to Northern, VA.

Charles was an avid fan of the NBA and the NFL; he loved football and was a true blue Redskin fan, (even this year). He loved going to the movies, and in his better days, he was there opening week whenever a new movie came out that he wanted to see. He was a big fan of Jeopardy, and he watched faithfully every night. Charles was a loving father, husband, brother, uncle, cousin and friend.

A private service will be held at a later date.
Read Less

Receive notifications about information and event scheduling for Charles

There are no events scheduled. You can still show your support by sending flowers directly to the family, or planting a memorial tree in memory of Charles Thurston Thompson.
Plant a Tree

Plant a Tree in Memory of Charles
Plant a tree 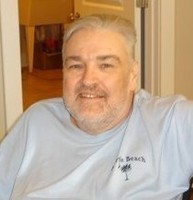