To share your memory on the wall of David Gray, sign in using one of the following options:

Provide comfort for the family of David Gray with a meaningful gesture of sympathy.

Print
DAVID PAUL GRAY, 64, of Nokesville, Virginia, passed away peacefully at Novant Health Prince William Medical Center on Wednesday, March 25, 2020, with his wife, Sharon, by his side.

David, “Dave” as everyone knew him, was born on Ap... Read More
DAVID PAUL GRAY, 64, of Nokesville, Virginia, passed away peacefully at Novant Health Prince William Medical Center on Wednesday, March 25, 2020, with his wife, Sharon, by his side.

David, “Dave” as everyone knew him, was born on April 20th, 1955 in Concord, New Hampshire, to Joyce Marie Gray (Parenteau-Wade) and William Frederick Gray, Jr. He was the youngest of four children. As a child, he, his mother and older brother, Glenn, moved to Florida. In Dave’s teenage years he and his brother moved to Virginia.

Dave enjoyed working with his hands and for several years worked as a Dirt Bike/ATV mechanic. He was a motocross enthusiast and often enjoyed watching professional motocross and participating with family and friends in weekend events during the years when his son was an amateur racer.
Dave was an avid outdoorsman and loved hunting, fishing and gardening. He also enjoyed cooking and listening to music, with a preference for classic rock or blues. Although Dave did not travel often, vacations were usually spent visiting family and reminiscing on good times past or exploring parts of the New England area.

His last greatest passion was his truck – a Ford F-150 which he fondly referred to as “RUBY”. When not doing yardwork or working in the garden, Dave could usually be found in his garage tinkering and dressing up his truck. Some may even say this was his first love!

Dave was a genuine man, very outspoken and headstrong, with a charming, infectious smile. He loved his family unconditionally. He did not hesitate to lend a hand when called upon by family or friends. Dave had a handful of good friends and a family that loved and cared for him greatly. There are no words that can express how deeply he will be missed.

He is preceded in death by his step- brother, James “Jimmy” Gray of Chuluota, Florida and by his father, whom he never knew.

A celebration of Dave’s life will be announced at a later date.

Receive notifications about information and event scheduling for David

There are no events scheduled. You can still show your support by sending flowers directly to the family, or planting a memorial tree in memory of David Paul Gray.
Plant a Tree

We encourage you to share your most beloved memories of David here, so that the family and other loved ones can always see it. You can upload cherished photographs, or share your favorite stories, and can even comment on those shared by others.

Posted Apr 20, 2020 at 11:08pm
I'll always remember the good times my dad and I had together in the garage helping him work on trucks and bikes. Everything he taught me I will pass on and never forget. One fond memory I will never forget will be when we built my pit bike together. Tons of things learned, lots of arguments, but countless days we spent together I would never give up. The memory I take from it is he told me to never sell the bike and he wanted me to pass it onto my kids. How something so simple made us bond so much, means the world to me sLove you dad and happy 65th bday! ❤️
Comment Share
Share via:
SG

Posted Apr 20, 2020 at 07:48pm
I THOUGHT OF YOU TODAY
I thought of you with love today but that is nothing new.
I thought about you yesterday and days before that too.
I think of you in silence. I often speak your name.
All I have are memories and your picture in a frame.
Your memory is my keepsake with which I'll never part.
God has you in His keeping - I have you in my heart. 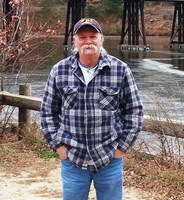