Use the form above to find your loved one. You can search using the name of your loved one, or any family name for current or past services entrusted to our firm.

Click here to view all obituaries
Search Obituaries
Immediate Need
We are here to help you. If you have need of our services, please call us, day or night, at:
703-368-3116
To better prepare yourself, we have provided you with some helpful information regarding the immediate need process.
Contact Us / Location

Ordering flowers from our site ensures that your order will reach us or the family in a timely manner, and your gesture of support will remain acknowledged in the Book of Memories for future generations. We only work with local florists so we can maintain the sense of urgency and quality of your selections. We thank you for helping to support the family during their time of need, and will fondly remember your kind gesture.

To share your memory on the wall of Dominick Gibino, sign in using one of the following options:

Print
Dominick James Gibino of Ellicott City, MD (formerly of Manassas, VA), passed away at home on Tuesday, October 22, 2019. He would have celebrated his 78th birthday on October 25th.

Dominick was born October 25, 1941, in Charleroi, PA,... Read More
Dominick James Gibino of Ellicott City, MD (formerly of Manassas, VA), passed away at home on Tuesday, October 22, 2019. He would have celebrated his 78th birthday on October 25th.

Dominick was born October 25, 1941, in Charleroi, PA, to Grace Ricotta Gibino (currently of Bealeton, VA), and the late Joseph Gibino. He grew up in Dunlevy, PA, one of many towns along the Monongahela River south of Pittsburgh. He graduated from the Charleroi Area High School in 1959 and recently attended his 60th high school class reunion.

After high school, Dominick continued his education, graduating from The Pennsylvania State University's College of Engineering in 1964 with a Bachelor of Science Degree in Aerospace Engineering. While at Penn State, Dominick was an active member of Alpha Phi Delta social fraternity (Chi Chapter) and was an integral part of the fraternity having served a term as President as well as serving in other chapter positions during his years at Penn State. Later still, Dominick attended graduate school at Ohio State University.

Dom traveled extensively throughout the United States and Europe both as a federal employee and in the private sector. His engineering career with the federal government began at Aberdeen Proving Ground in Maryland. Then he accepted a position at the Aeronautical Systems Division at Wright-Patterson Air Force Base in Ohio.

While at WPAFB, he met and married Peggy Carey of Sidney, Ohio and they settled in Dayton where they welcomed three daughters, Mary, Rebecca and Sarah. The girls learned Polish dancing; they all were members of St. Adalbert’s parish; and Dom often reminisced about the good friends and times they had while in Dayton.

In 1984, he retired from WPAFB and moved with his family to Manassas, Virginia as a co-founder of Simtec, Inc, a developer of flight simulators and other military training systems. There he served as vice-president of engineering. Following his years at Simtec, he returned to the Department of Defense to work with the U.S. Marine Corps amphibious assault vehicle program.

In a private capacity, Dominick helped develop and obtain a patent for an energy-saving device with commercial applications. He subsequently sold his share of that patent, but his interest in energy sources had taken root and he began to focus on alternate forms and sources of energy throughout the universe. He joined The Resonance Science Foundation, an organization based on belief in ‘an infinite, unified view of science and humanity’ - Dominick firmly believed that the resultant harmony would have power to overcome so many problems in our world and in ourselves. Along with the physics of the science group, his belief in spiritual powers grew tremendously, becoming powerful in his life. He met often with others to explore this area, and their support and friendship sustained him and inspired him, especially during the illness and loss of his beloved wife, Peggy. In autumn of 2018, to enhance his growing belief system, he requested ordination into the Order of Melchizedek.

Because of his profound dedication to the power of the energy in us and in the world around us, Dominick developed a teaching module which he presented publicly to share his beliefs. Although intricate concepts filled his pursuits, he could readily draw joy from his morning walk and the simplicity of nature.

Dom is survived by his mother, Grace Gibino of Bealeton, VA and his three daughters, Mary (Ron) Fellenz of Gainesville, VA; Rebecca (MacKinnon) Gibino of Ellicott City, MD; and Sarah (Todd) Martin of Brentwood, TN. He is also survived by his grandchildren, Anthony, Adriana, Erin, Liam and Savannah and two much beloved great-grandchildren, AJ and Sophia; his brother, Joseph Gibino of Charleroi, PA; his sister, Anna Kerr of Catlett, VA; many cousins, nieces and nephews and great nieces and nephews primarily in PA, Ohio, VA and MD. Family ties were at the core of Dominick’s values and this past summer, he was happy to be able to travel to those states and see so many of his extended family and along the way, many old friends.

In lieu of flowers, please consider donating to the Alzheimer’s Foundation of America (AFA). Donations may be made online at https://alzfdn.org/support-us/donate/, or If you prefer, you can donate by check payable to AFA, 322 Eighth Ave – 16th floor, New York, NY 10001. Along with your name and address, please state that your donation is given in memory of Dominick Gibino and request that acknowledgement to be sent to Rebecca Gibino, 2696 Thornbrook Road, Ellicott City, MD 21042.

The family will receive friends on Saturday, November 9. 2019 at Baker-Post Funeral Home & Cremation Center, 10001 Nokesville Rd, Manassas, VA 20110. A remembrance service will begin at Noon in their chapel, with Pastor Larry Owens officiating.

To send flowers to the family or plant a tree in memory of Dominick Gibino, please visit our Heartfelt Sympathies Store.

Receive notifications about information and event scheduling for Dominick

We encourage you to share your most beloved memories of Dominick here, so that the family and other loved ones can always see it. You can upload cherished photographs, or share your favorite stories, and can even comment on those shared by others.

Mike and Staff at Nourishing Journey sent flowers to the family of Dominick Gibino.
Show you care by sending flowers

Posted Nov 08, 2019 at 06:28pm
I was honored to have met you. You gave mom a wonderful life. I cherish the conversations we had during my visits and messages.

Mike purchased the Blooming Garden Basket and planted a memorial tree for the family of Dominick Gibino. Send Flowers

Posted Nov 07, 2019 at 03:16pm
Wishing you peace to bring comfort, courage to face the days ahead and loving memories to forever hold in your hearts.

Flowers were purchased for the family of Dominick Gibino. Send Flowers

Gracious Lavender Basket was purchased for the family of Dominick Gibino. Send Flowers

Posted Nov 03, 2019 at 09:45pm
One of the most amazing people I've ever encountered. To know him is a blessing to remember him is an honor. He was more then just a client, he was a friend, my Italian uncle as we would joke. I'll never forget all his amazing stories. He loved life and life loved him. He was a family man I got to know his family through his stories. He loved his wife deeply and shared some things with me that are imprinted in my heart forever. He spoke so highly of his daughters and grandchildren He will truly be missed. Even when he moved we kept in contact through text messages from time to time. I was sad to hear this news but then I heard him say it's not goodbye kiddo :""""") 🎈
God bless you Mr. Gibino! Heaven is surely having a party and I truly believe you're dancing with the love of your life to Christmas music. You'll be missed. Prayers going up for your entire family. Respectfully your friend Christine Asadourian. Love lives !
Comment Share
Share via: 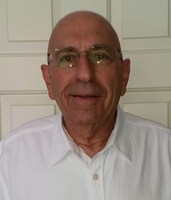 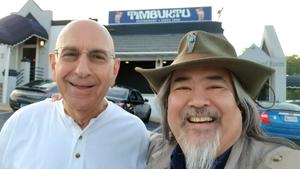 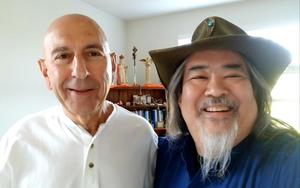