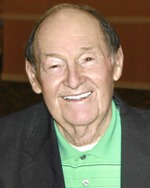 John was born on October 27, 1934 in Shawsville, Virginia to William Bane and Claudine Atkinson. He attended Roanoke College and received a Bachelor’s degree from University of Richmond. He was a practicing CPA for over 60 years. He was married to his soulmate Debbie, had three children and two step children all of whom he adored.

Johnny was raised in the Shenandoah Valley and had a deep love of the state, its history and its beauty. He spent his entire life in the state helping others and his communities. He gave his time and talents chairing numerous organizations including Rotary Club, Prince William Hospital, Chamber of Commerce and Historic Manassas. He established an academic scholarship at Roanoke College and also supported numerous initiatives with Wintergreen Resort.

He was a founding member and President of Evergreen Country Club, and spent much of his life with a golf club in his hand. Whether it was teaching his family, sharing that passion with friends and loved ones or playing as many different courses as he could, his mind was never far from the game. His five hole-in-ones can attest to his love and tenacity with the sport.

Johnny also had an insatiable curiosity for Civil War history. So much so, he spent eight summers taking courses which took him and his wife across the entire state visiting every Virginia battlefield. He often commented how much Debbie must love him to be his sidekick during those day-long excursions.

Johnny’s ability to connect with all he met through his empathy, sense of humor and genuineness will continue through all those he touched.

Johnny was preceded in death by his mother Claudine, father William Bane Sr., and brother William Bane Jr. He is survived by his wife Debbie, children Bruce (Cathy), Leslie (Rita) and Brett, stepchildren Jason and Paige and grandchildren Bobby, Grant and Claire.

The family will be celebrating his life this Saturday, October 5th at Grace United Methodist Church, 9750 Wellington Road, Manassas, VA. Visitation is at 10am with service at 11am.

In lieu of flowers, donations can be made to the American Alzheimers Association.