To share your memory on the wall of Lewis Taynton, sign in using one of the following options:

Lew was born in Port Jervis NY on March 2, 1943 to Lewis C. and Laura (Craig) Taynton. As an Army brat, Lew lived in numerous locations around the U.S. and overseas in Austria, attending 5 different high schools along the way. He went to the U.S. Naval Academy in Annapolis MD, graduating with a degree in electrical engineering, commissioned as an ensign in the class of 1964.

His Navy career included serving on 2 diesel submarines (USS Bang & USS Corporal) and a nuclear fast attack submarine (USS Hammerhead), as well as teaching at Submarine School in New London CT. He left the Navy in 1973 having attained the rank of Lieutenant.

As a civilian, he worked in nuclear power with Babcock & Wilcox (Lynchburg VA) for 5 years. In 1978 he moved to Science Applications Int’l Corp. (SAIC) (Oak Ridge TN) and did business development as well as several years as the Director of the American Museum of Science and Energy. In 1983 he moved to SAIC’s Corporate Office (McLean VA) continuing in business development and project management. In 1992, he moved to a horse farm in Sudley Springs VA, surrounded by the Manassas National Battlefield Park, with a longer commute to McLean. As a “gentleman farmer”, he became very involved as a volunteer with the Battlefield Equestrian Society. Lew entered semi-retirement in 1999 doing SAIC business development from the comfort of his recliner until shortly after his diagnosis in late 2017.

Interment will be at Arlington National Cemetery at a later date.

To send flowers to the family or plant a tree in memory of Lewis Frederick Taynton, please visit our Heartfelt Sympathies Store.

Receive notifications about information and event scheduling for Lewis

We encourage you to share your most beloved memories of Lewis here, so that the family and other loved ones can always see it. You can upload cherished photographs, or share your favorite stories, and can even comment on those shared by others.

Posted Dec 15, 2018 at 06:24pm
Diane and family,
I am so sorry about Lew's illness and passing. He was such a wonderful and kind man. The Topaz Vaulters were very blessed to have enjoyed the years of use of the indoor arena for practices and activities. Diane, yours and Lew's gracious generosity was a blessing to the team for many years. I have so many happy memories of not only the vaulting, but of the enjoyable trail rides on Duke on the battlefield.

Love and prayers to you all.

Posted Dec 09, 2018 at 01:02pm
I have lost a friend. We spent many years apart after College, but he always felt special. He was a good man. God Bless his family and memories.
Comment Share
Share via:
JJ

Posted Dec 05, 2018 at 04:37pm
Jack and I send love to you and your family at this hard time. I will remember Lew as a kind person who loved to visit the winerys in Virginia.
Comment Share
Share via: 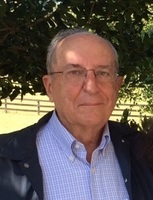