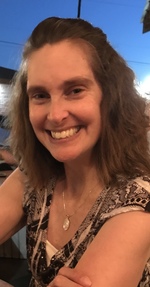 Melissa Jo (Neuberger) Mayland, the daughter of Darrell and Diane
(Larson) Neuberger, was born March 30, 1973, in Ames, IA. They moved to
Garner, IA in 1977 where Melissa received her education at Garner-Hayfield graduating with the Class of 1992. She received her fashion merchandising degree from Ellsworth Community College in 1994. She worked in retail in the Minneapolis area for several years.

Melissa loved people, especially the elderly and enjoyed her time working at Concord Care Center and Cardinal Grove Assisted Living in Garner. Also, as a Home Health Aid in Virginia where she formed many friendships. On November 8, 2002, Melissa was united in marriage with William (Bill) Mayland. Her wish for a family was fulfilled with the blessing of three children: Gillian, Samara and Atticus. Melissa passed away on January 19th after nearly a twelve year battle with cancer.

She was preceded in death by her grandpas, Lincoln Neuberger and
Martin Larson; grandma, Marjorie Larson and father-In-Law, William
Mayland, Sr.

She was admired by many for her strong faith, bravery and empathy. Melissa touched many lives with her generous spirit, her loving smile and she will be cherished by all who had the pleasure to know her.

Interment will be at Concord Cemetery in Garner, Iowa.

In lieu of flowers, memorials to the family are preferred and will be used towards establishing an 529C educational fund for her children. A PayPal account has been set up at wmayland@yahoo.com.


To send flowers to the family or plant a tree in memory of Melissa Jo Mayland, please visit our Heartfelt Sympathies Store.