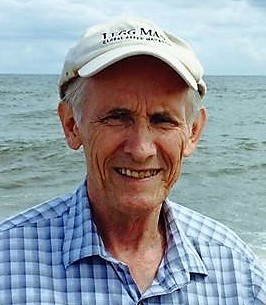 Print
Michael (Mike) Johnson (77), of Haymarket, Virginia, died Sunday, October 21 2018, after a 14 month- long struggle with Acute Myelogenous Leukemia (AML). He was born and raised in Philadelphia, PA. He is survived by the love of his life, his “young bride” Pat of 52 years, and three sons: Chris (daughter-in-law Marya, granddaughter Anna), Neil, and Joel (daughter-in-law India, granddaughter Olivia and grandson Evan). He is also survived by his sister Carolyn (brother-in-law Jim), of Harleysville, PA, brother Ken (sister-in-law Diana), of Phoenix, AZ, and brother Tom (sister-in-law Beth) of Willow Grove, PA, and four nieces and two nephews. He loved his family very much and they were the joy of his life.

Mike served four years in the Air Force and 41 years with the Central Intelligence Agency. He spent two years in England, and one year in Taiwan with the Air Force. Over 21 years overseas, working with the CIA, he and his family lived in Lagos Nigeria; Kathmandu Nepal; Rangoon, Burma; Chiang Mai, Thailand; Monrovia, Liberia; Islamabad, Pakistan and Bangkok, Thailand. He also worked at General Dynamics before finally retiring. Mike was very patriotic and loved this country. He believed that the United States is the greatest and most generous country in history.

Mike’s passion was wrestling, he was known throughout the community as “Stat Man.” He was a big fan of high school and college wrestling for the past 31 years, since the family returned from their last overseas assignment in 1987. He had been a runner for over 40 years, and was an avid walker for the last 20 years. He loved walking the trails in the Villages of Piedmont at Leopold’s Preserve. Slowing down and struggling to finish his trail walks were the first indications that he had a serious problem, which turned out to be diagnosed as AML.

Mike was very thankful for the treatments he received from Virginia Cancer Specialists and to the Red Cross blood donors who extended his life well beyond the original diagnosis. He was engaged in an AML Clinical Trail at the time of his death.

In lieu of flowers you may contribute to the Leukemia and Lymphoma Society at http://www.lls.org.


To send flowers to the family of Michael Edward Johnson, please visit our Heartfelt Sympathies Store.

We encourage you to share any memorable photos or stories about Michael. All tributes placed on and purchased through this memorial website will remain on in perpetuity for future generations.

JB
Jean and I were saddened to hear of Mike's passing.
If you were involved in wrestling then you knew Mr. J. He not only kept statistics, for every wrestler, but he also made video's of their matches. He will be remembered.
Joe and Jean Bacon - Friday November 09, 2018 via Condolence Message
Share This:

Thinking of you all. Wishing you strength and peace as you remember a great man.

KN
I am so sorry to hear about your loss. I remember clearly as a child hearing all the stories my Dad shared about your adventures from around the world. How exciting that must have been to live in and explore so many different places on this Earth together as a family. I'm so grateful that Uncle Mike and my Dad were able to reconnect this past year and share together about the Johnson family heritage.
Kathleen Andersen - Niece - Wednesday November 07, 2018 via Condolence Message
Share This:

RM
We can remember Mike telling us that he wanted to be around for Christmas 2017. He certainly fought a good battle...your family's love certainly helped him have the strength to keep on living as long as he could. Our condolences.
Ray and Sheila Moros - Thursday November 01, 2018 via Condolence Message
Share This:

JM
Pat & kids
I am so sorry for your loss. I have many great memories of Mike, both at work and during our hunting trips in Kathmandu. You guys were absolutely wonderful in helping us get settled in Kathmandu. I'm just glad that I got to see both of you at the reunion in Cocoa Beach. With email over the last few years, Mike and I were in almost daily contact chatting about politics and laughing at today's world. I'm going to miss his emails. Jack & Pat Michko

Sorry to hear about Mike. I plan on attending the celebration of life. See you then.

LS
Chris and I were very sorry to hear of Mike's passing. We are truly grateful that we were able to visit with him at the last reunion and greatly appreciate the effort he put into getting there.
Larry and Chris Silves - Tuesday October 30, 2018 via Condolence Message
Share This:

ME
Mike was one of those people you could love. He brought sunshine out of a major crisis. When one mentioned his name (Mike Johnson) all eyes and ears turned to listen of just what he had done next.
He will be sorely missed by many people.
Mary Jane / Bill Ellis - Tuesday October 30, 2018 via Condolence Message
Share This:

NB
Pat, Chris, Neal & Joel,
We are so sorry for your loss of your husband and father. We have so many fun memories from our families being together overseas. Who knew at that time we would be dealing with old age, health issues and loss of so many of our friends and loved ones now. Browsing through old photos brings smiles and even laughter while reminiscing through the photos. Keep those memories close to your heart. Our thoughts and prayers are with all of you. RIP Mike.
Nevin & Judy Baker - Tuesday October 30, 2018 via Condolence Message
Share This:

View Video
Send flowers to the family
Choose from beautiful standing, table and basket arrangements. Safe and secure online ordering.
View Flower Arrangements
What has already been purchased for the family?
Subscribe to Updates