In Memory of
Rachael Angela Drena
La Touche
1958 - 2020
Click above to light a memorial candle. 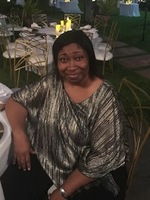 Rachael Angela Drena La Touche was born on April 27th of 1958 in Port of Spain, Trinidad and Tobago. She was the daughter of Cecelia Mahabir (deceased 2015) and brother of Earl Mahabir.

In Angela’s younger life, she lived in Antigua for a few years and returned to Trinidad at the age of 10, where she remained for most of her life. As a young adult she lived with her godmother, Mrs. White, until venturing out on her own. Angela married Daniel La Touche in 1985 and had two children Jael La Touche and Gabrielle La Touche (deceased 1998).

She pursued a course of study leading to her LLB Degree from the University of London and continued her studies at the University of Southern Caribbean where she obtained her Masters Degree in Educational Administration. She spent most of her career at the Ministry of National Security holding various positions. Angela retired from her position of Legal Researcher in 2008 and moved to New York to take care of her aging mother Cecelia Mahabir (deceased 2015). At the onset of various health complications in 2019, she moved to Virginia to be with her daughter, Jael.

Angela was an avid traveler, visiting various countries on three continents. Her travels took her from the jungles of Brazil to the Colosseums of Italy. She had a deep desire to engage with cultures that differed from hers and allowed her to connect to the experiences of others. This desire led to her interest in learning new languages such as French, German and Spanish and learning to play the guitar. She was a member of numerous singing groups such as Great Life Embassadors, Final Hour Choir and Akord. Angela’s love for her family was only superseded by her love for her Father. One of her favorite bible texts, John 3:16, described God’s love for her and in her life she happily returned that love. Her love for God was evident in the amount of time she spent with Him. She was an active member of multiple bible study classes and also greatly involved in the Lions Charitable Club.

Angela’s health complications started in February of 2019 and ended in October 2020. She will be greatly missed by her family and friends, but they are comforted in the memories of her life and testimony. Angela’s life had been a gift to all those who met her. As 2 Timothy 4:7 says, she fought the good fight, finished the race and kept the faith. Those who have been blessed with her example look forward to meeting her again.


To send flowers to the family or plant a tree in memory of Rachael Angela Drena La Touche, please visit our Heartfelt Sympathies Store.