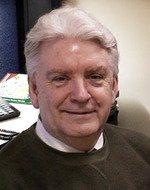 He was born on October 24, 1945 in New Jersey to the late John Spaldo, Sr. and Amelia Dean Spaldo.

He graduated from Bridgewater-Raritan High School in Bridgewater, NJ, in 1963. He attended Quincy University in Quincy, Illinois, majoring in political science, and in 1975 received his Masters’ Degree in Higher Education Administration from the George Washington University. He also served in the US Army in Korea as an intelligence analyst.

On March 6, 1976, John married Debra Mentzer in Nokesville, VA and their daughter Maren (Spaldo) Kench was born on May 18, 1982. He began working at George Mason University in 1981 and retired as the Associate Vice President of University Operations in 2008. John enjoyed reading a good book, especially if it was related to US history. He loved spending time with his family and friends while gathering around a favorite television show, watching a baseball game or traveling.

In lieu of flowers, donations may be made to the following organizations in John’s memory:

To send flowers to the family or plant a tree in memory of John Louis Spaldo Jr., please visit our Heartfelt Sympathies Store.