To share your memory on the wall of Nellie Hanlin, sign in using one of the following options:

Provide comfort for the family of Nellie Hanlin with a meaningful gesture of sympathy.

Born September 28, 1925 in Woodbridge, to the late Henry and Irene Arnold Davis; she married Ralph Brown in 1946; they had seven children and departed ways in the early 1960s and alone raised her children and taught them to be good productive adults.

She was a longtime resident of Woodbridge and was retired from the Woodbridge Post Office where she met and eventually married her 2nd husband Rosten Hanlin on May 22, 1982. She loved the Outer Banks where many memorable family vacations were had. She and Rosten retired to Warsaw, VA and enjoyed 17 years together before he passed away in 1999. She enjoyed crocheting Afghans for everyone in the family.

She is preceded in death by her husband; Rosten, her children Ralph Brown, Barbara Brown, Betty Harstad and Eileen Brumbaugh and her stepson; Mike Hanlin

We encourage you to share your most beloved memories of Nellie here, so that the family and other loved ones can always see it. You can upload cherished photographs, or share your favorite stories, and can even comment on those shared by others.

Louis Gilliam Jr and family, David ,Harriett Gilliam, and others have sent flowers to the family of Nellie Lue Brown Hanlin.
Show you care by sending flowers

Posted Jun 20, 2019 at 02:29pm
When you speak of her, speak not with tears, for thoughts of her should not be sad. Let memories of the times you shared give you comfort. We love you 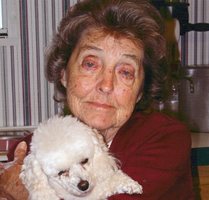