To share your memory on the wall of Nelson Robinson, sign in using one of the following options:

December 18, 1927, James Nelson Robinson was born to Clyde Earl and Wavie Thelma (Clarke) Robinson in Amarillo, Texas. Shortly thereafter his family moved to Freedom, Oklahoma where he lived until attending and graduating from Oklahoma A&M (now Oklahoma State University) in 1949. He served in the Army for 2 years then was a County Extension Agent before going into the field of farm broadcasting. He was a television and radio Farm Broadcaster at KWTV and then WKY, both In Oklahoma City. He moved with his family to Herndon, Virginia in 1970 to work for the Department of Agriculture in farm broadcasting, retiring in 1989. Nelson and Martha moved to Haymarket Virginia in 2006 where Martha still resides.

Due to the uncertain times in which we live, there are no services being held at this time. Instead, a Celebration of Life for Mr. Robinson will be held at a later date.

In lieu of flowers the family suggests donations to The Parkinson’s Foundation.
Read Less

To send flowers to the family or plant a tree in memory of Nelson Robinson, please visit our Heartfelt Sympathies Store.

Receive notifications about information and event scheduling for Nelson

We encourage you to share your most beloved memories of Nelson here, so that the family and other loved ones can always see it. You can upload cherished photographs, or share your favorite stories, and can even comment on those shared by others.

Posted May 01, 2020 at 11:16am
To Martha and Family,
I knew Nelson from his USDA days but was also linked by his mentor and employers: Wayne Lisle and Russell Pierson. Nelson was a gentle man and a gentleman. He worked with some of the greats of farm broadcasting and cast a long shadow himself. Russell, my original boss in farm broadcasting at WKY, spoke very kindly of Nelson and their years together. The legacy of our industry would be less without him. A long life, well lived. God bless you.
Comment Share
Share via:
TB

Posted May 01, 2020 at 12:04am
On behalf of the National Association of Farm Broadcasting (NAFB), which Nelson was a member since 1957, I'd like to share our condolences with the Robinson family and Nelson's friends.
I've sorted through our association archives and found several pictures and articles that include Nelson at https://nafb.com/online-archives/RobinsonNelson. 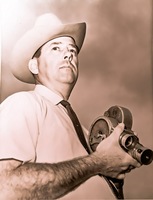